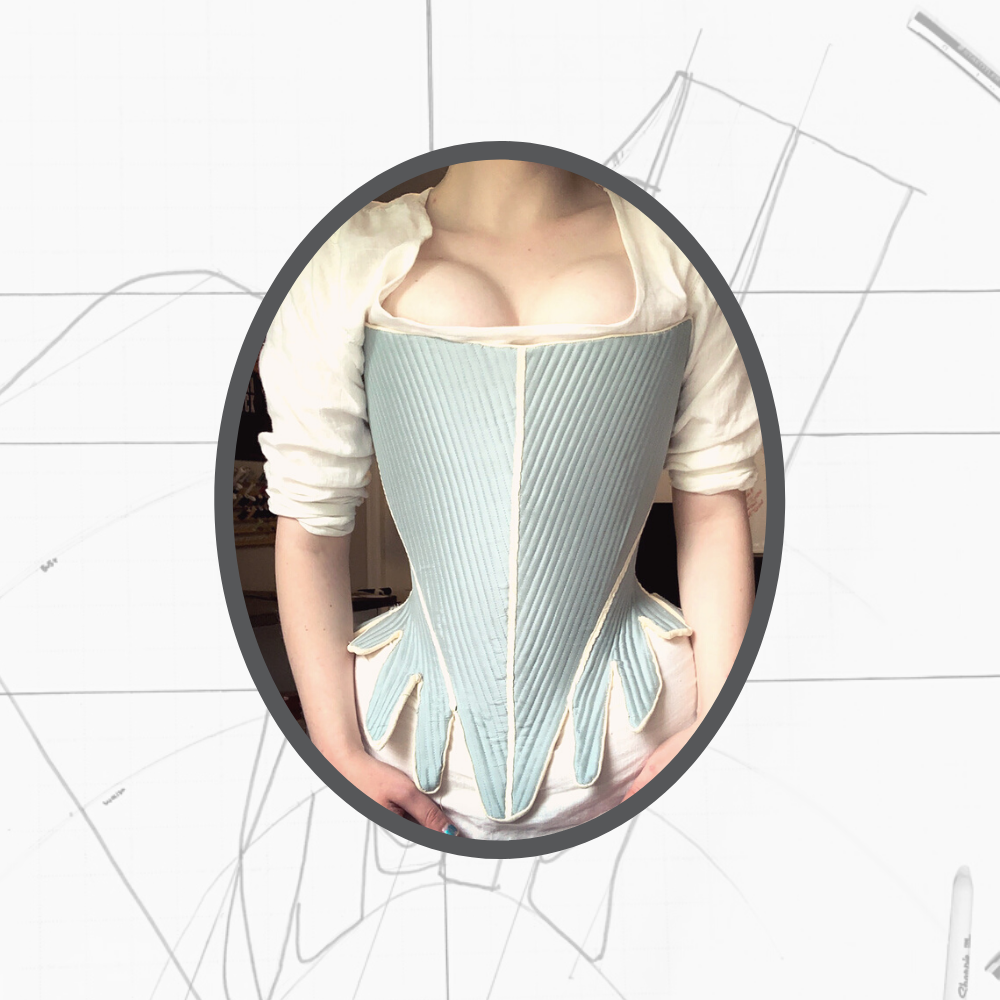 After seeing some lovely versions of the #24- 1760-1770s stays from Patterns of Fashion 5, I decided to try my hand at making a pair of stays that actually fit.  I joined Foundations Revealed this year, so I had access to a new archive of resources, as well as the ability to ask Luca Costigliolo questions about the arc-drafting method and fit questions.

I’ll start off by admitting, I don’t have a great track record with stays.  I actually really enjoy making them, but I have always rushed through the mocking up step.

My first pair, were made using the Butterick pattern. I made a single mock up out of an old bed sheet, saw that it was short, added a few inches to the length, and then jumped in to making them.  Shocker, it didn’t end well.

So I tried again, this time using the simplicity pattern and the tutorials from American Duchess.  This time, I made two mock ups, one to realize it was WAY too short on my torso, and then another to see if the adjustment worked.  I didn’t bone either mockup, and again (after hand-stitching my boning channels, for the first and last time), it didn’t end well. They were overly short, squished my boobs, and made me feel like I was going to pass out when laced tightly. Not great.

I began the process by thoroughly reading the section of PoF5 on drafting the pattern. Not going to lie, I found it pretty difficult to understand without outside assistance, but luckily for all of us I believe a supplement on arc-method drafting is in the works.

To start, I needed to take my measurements.

I won’t go into all the steps involved in the drafting process, because that’s what the book is for, but some tips I found useful:

One change I did make to the original pattern was that I included a lacing gap in the back.  As lovely (and comfortable) as fully closing stays are, my weight fluctuates a TON. After a few months in quarantine, I’ve gained a bit of weight (although I’d gained some before that too) and really don’t want to have to make a new pair when I (hopefully) lose it. I also tend to have pretty large fluctuations from bloating during my period so I wanted something that would accommodate that.

Here is my first pattern draft. I had used an older tutorial for the arc-method that described using the circumference of your waist and bust to create the arcs, which actually doesn’t quite give you the right shape. The biggest place you notice the difference is on that bottom-most blue line, which denotes the high hip line.

This sketch kind of gives you an idea why you want that high hip line to have more of a curve to it. It allows the stays to sort of flow over your hips, so it can have support where you don’t have hips in the way (like your front) but give you more room where there is bone there and obviously don’t want pressure.

I also found it far more comfortable. My second pair of stays end at my natural waist, and as such, they pinch my waist if I lace too tightly. With this new pair, because it curves out and allows the hips to bear a bit more of that pressure and distribute it more evenly, it is more comfortable to wear.

So looking at this mockup, I’m not getting much shaping going on .

And the reason is because I haven’t curved the high-hip line enough. I’ve sketched with the blue approximately where the line should be, compared to where it was drawn. It’s not steep enough, and so essentially what this is doing is sitting about an inch below my natural waist all the way around. This is fine at the top of the high hips, if I were to lower this point it would cause discomfort as it puts more pressure on the hip bone, but the rest could fitted to provide more shaping.

Oh, and the back was a bit tall too.

With those lines drawn incorrectly, it was time to redraw the whole thing.

Now you can see that curve to the high hip line, and side by side you can see the difference in how the pieces are shaped, as well as where they fall on the body. Other changes made at this point were lowering the height of the back, taking in the bust, and a bit off the waist since I had neither a gap nor any reduction in the previous pair.

The next mock up was closer but still a bit big in the chest, and still didn’t provide the lacing gap I was hoping for. The back was still too high as well. The shape is closer to what I wanted though.

To create more of a gap in the back, I made the following alterations:

This mockup was really quite uncomfortable. I was a bit too liberal with my scooping at the waist, and because I hadn’t kept enough at the hip to allow clearance for my hip bones, it put quite a but of strain there. The lacing gap at the hip was too big, but there wasn’t a gap anywhere else, and my bust was still too big, with that part of the mockup overlapping at the top.

This was also the first time I tried a busk on Luca’s recommendation and it really did make a difference in creating that support and firmness on the front over the belly.

(By busk, I actually mean yardstick because who can find a busk when you need them? But for trying them on, it worked in a pinch until I got my sewing room cleaned.)

The bust still being quite a bit too big, I was curious to see how the pattern would differ if instead of altering the larger bust pattern I tried redrafting the pattern with smaller bust measurements from the start.

It ended up being a bit closer to what I wanted, about the right size bust, shorter in the back, a smaller lacing gap (although still a bit of overlap at the top). In particular, I liked that the lacing gap was at my belly rather than the top or the hips. This is a personal preference, knowing that this is the part of my body that fluctuates in shape the most. The bust was still too low, and the skirts and hips didn’t fit as well, I think because I used a slightly less steep curve for the hip line.

Next, I went back to mockup #3, and kind of made a middle of the road version. Below you can see I took in the bust another good chunk, and the ‘scoop’ between 2 & 3 was moved higher with no reduction at the hip, to provide enough room for the hip bone and to make sure they are comfy.

I had left a bit of extra fabric at the top of the stays because the last draft had been so low in the front, and I’m glad I did because I ended up needing to raise the bust line for the final iteration.

There was also a gap in the back, which was maybe a little wider than I would have wanted, but I wasn’t too worried about it. I tend to go up a couple inches around my waist around my period, and I assumed that that was what was going on. In hindsight, I would have probably tried to make this smaller because once you get all your stuff inside the stays like the belly piece and the lining, they get smaller, and I didn’t take this into account.

The only change I made from the final mock-up was to raise the bust an inch or so, because I felt it was a little low.

For my layers, I had planned on using two layers of linen canvas, sandwiched between a fashion layer and a linen lining.

For the fashion layer, I decided to use some blue silk I had purchased at Pacific Fabrics when they were closing their Northgate location. I have around 12 yards of this blue in an assortment of randomly sized pieces, and it only cost $2.50 a yard.

For the canvas, I purchased this linen canvas from Etsy. https://www.etsy.com/listing/386265570/100-linen-unprimed-canvas-unstretched-69?ref=yr_purchases.

When it arrived, I was a little disappointed in how loosely woven it was. I bought it because I thought it would be a little heavier and sturdier than the heavy-weight linen from Fabric-Store.com I already had, but it really wasn’t. For my next pair of stays, I’ll probably just stick with the heavy-weight linen or a cotton duck canvas.

But having already spent the money, I was determined to use it. I had purchased gum tragacanth to make buckram for the belly piece of the stays, so the plan was to glue this canvas as well to give it a little extra strength.

The next step was cutting the pieces out. On the original, the grain line followed the direction of the boning, so I did that with my pattern as well. One of the plus sides of having a slightly looser weave to the canvas was that it made it really easy to follow one strand and find the straight grain.

I went ahead and cut out the silk too at this point, which was pretty lightweight. I don’t know the exact type of silk, maybe like a not-very-slubby shantung or dupioni. With the silk being so light compared with the wool sateen from the original, along with my worries about the canvas, I decided to add an additional layer of the fabric-store linen too. This would just add a bit extra stability. 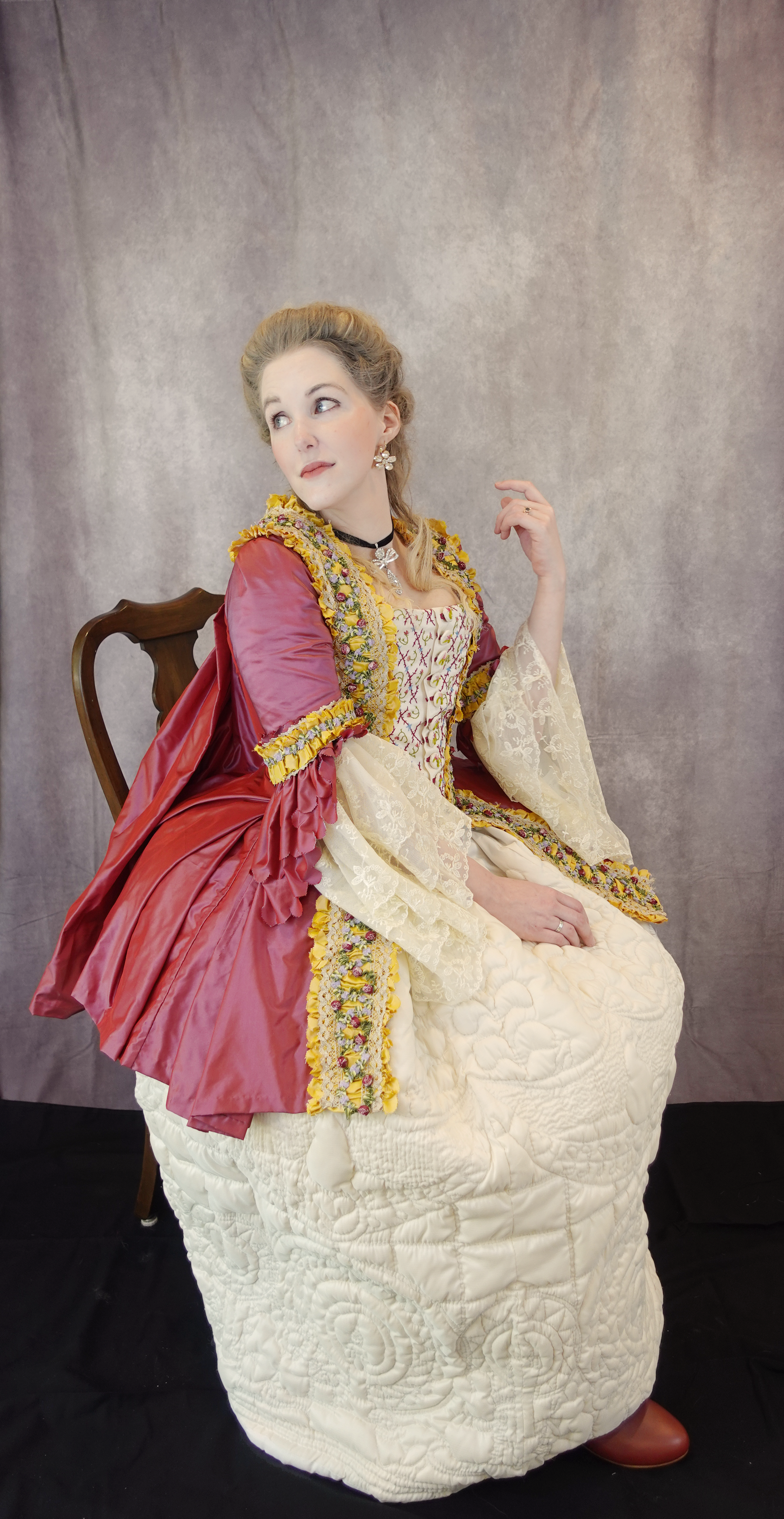 The Mantua Maker of Gloucester